Have you ever heard of a fox that climbs trees? The Gray Fox is the only member of the dog family in North America that does. Save endangered species today by joining one of our campaigns!

The Gray Fox has a short muzzle and legs, along with large, round toe pads. As you may have guessed from the name, the Gray Fox has grey fur. However, it also has red patches on its neck, sides, and legs, and a black stripe down its back and tail.

Strangely, there isn’t a clear reason for why the Gray Fox population declined in Canada. It’s thought that trapping is the main reason for their numbers staying so low. Car collisions and loss of forest cover are also thought to be threats.

Gray Foxes are protected under the Ontario Endangered Species Act (2008), which also protects the Gray Fox’s habitat. Hunting and trapping guidelines in Ontario and Quebec state that foxes trapped accidentally must be released if they’re alive.

The habitat on Pelee Island is protected under the Provincial Parks and Conservation Reserves Act. 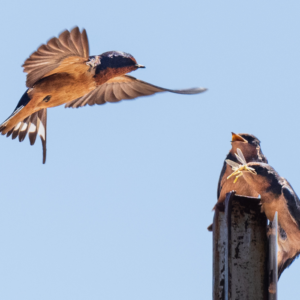 According to legend, this swallow got its forked tail after angering a god. Save endangered species today by...