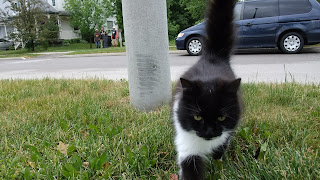 Domestic cats kill 1.4 to 3.7 billion birds, and 6.9 to 20.7 billion mammals annually in the United States, according to a paper published this week by Scott Loss, Tom Will and Pete Marra, in the journal Nature Communications.

The report points out that the large majority of these deaths are caused by cats without owners.  Reading this reminded me of  an experience I had while conducting field work for my Masters Thesis in the Grand River Forests between Cambridge and Paris, Ontario.

I was conducting breeding bird surveys deep in the forest, probably a couple of kilometres from the nearest residence, and twice spotted cats perched high above the ground on tree branches, watching me like a bobcat would.   They were likely farm cats, or abandoned cats (it’s not uncommon for people to dump an unwanted cat in the country) that had essentially become ‘wild.’

I also have a vivid childhood memory of my friend’s cat catching a Barn Swallow.  Standing by his swimming pool, I watched adult swallows zipping through the air in pursuit of insects to feed their brood living in their garden shed.  I noticed the swallows changed their behaviour and started swooping low over something on the ground, which turned out to be my friend’s cat.

The cat was laying on its back, face up, watching the spectacle, as the swallows swooped closer and closer.  The cat flattened itself, compressing its body against the ground, as the swallows swooped closer, only a few metres from the entrance to the shed, and their nest.  Then suddenly, with lightning speed, the cat shot up a paw, batted a swallow from the air, and proceeded to grab it in its mouth and run away.  One less parent to feed the brood!   I stood there dumbfounded at what I had just witnessed – confused by my feelings of empathy for these graceful birds, and awestruck by the incredible hunting ability of the cat.

Reading the recent report about cats’ impact on wildlife is a sharp reminder that the problem has not gone away – but perhaps has gotten much worse.  We need to, and can do, more in our urban environments and rural environments to reduce our impacts on wildlife.

By and large, cats and birds simply do not get along. The most effective way to protect birds and other wildlife from cats is to keep your cat indoors.

Keeping cats indoors not only helps prevent predation of birds and wildlife; it also reduces the spread of disease, unwanted reproduction, and prevents the cat from being struck by cars.

If you must allow your cat to roam free, be sure to locate bird feeders in open areas where cats cannot ambush birds. Place guard fencing or other obstacles at the base of the feeder to make it harder for cats to climb feeders. Do the same around trees where you have nesting birds.

Other ways to prevent cats preying on birds:
[list]

Here’s how you can help make this bill a reality.

‘Sing, Fly, and Soar’ is this year’s theme for World Migratory Bird Day, which focuses on celebrating the...

Excitement builds as two Ontario cities, Hamilton and Burlington, wrap up their applications in the process of becoming...