The message is clear: droughts, fires and floods linked to climate change are increasingly harming human communities and damaging the health of our planet. The window for action to protect ourselves is closing.

The report stresses that human-caused climate change is not only impacting humans—it is threatening the survival of hundreds of thousands of other species.

Human-caused climate change, exacerbated by pollution and habitat degradation and destruction, threatens the ecosystems upon which we depend for food, water and well-being.

Climate change has caused local extinctions in almost half of species studied. It is causing mass die-off of trees, coral reef bleaching and large declines in sea-ice dependent species. Warming of 1.5 C could cause more than a million of the world’s species on land to vanish.

But the report offers a ray of hope: by ramping up action to protect and restore nature we can reduce the worst risks of climate change and improve human equity and well-being.

The report’s authors recommend conserving 30 to 50 percent of the world’s land, freshwater, and ocean areas—a big challenge, but one that is urgent and essential for the continuation of all life on earth.

Authors also call for the adoption of nature-based climate solutions like planting and protecting carbon-rich forests and other ecosystems, incorporating both scientific and Indigenous knowledge to ensure efforts yield the greatest climate impacts. In addition to mitigating climate change, so-called “ecosystem-based” approaches that focus on improving ecosystem health—such as protecting coastal wetlands to prevent floods—are often the most cost-effective and widely beneficial adaptations as our climate becomes less and less predictable.

Canada, as the world’s third most forested country and home to Earth’s longest coastline, has a particularly important role to play in protecting nature.

Our government has already made nature a key part of its climate plan.

Canada has committed to protect 30 percent of land and water by 2030, including increased investments in Indigenous protected areas, while the last federal budget made impressive investments in nature-based solutions and natural infrastructure.

Nature Canada will be building on these commitments this year by calling for Canada to adopt a comprehensive plan to halt and reverse nature loss by 2030 that includes:

The 2019 IPCC report sparked thousands of cities, towns and countries to declare a climate emergency. Let’s read and share the current report, and make sure that it too is a catalyst for a just transition away from fossil fuels and an accelerated action to protect and restore our irreplaceable forests, grasslands, wetlands and coastal ecosystems. 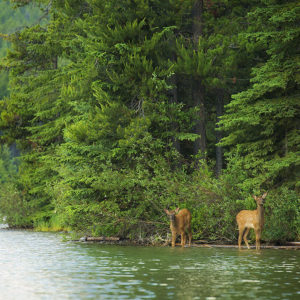