The return of purple martins to our Essex colony site comes with mixed blessings. The weather and lack of food following their return from South America has made survival conditions quite difficult.

The weather and cold northerly winds have negatively impacted Ontario’s martins. It is May 5, 2020, and the temperature has not yet risen above nine degrees Celsius. Strong winds, persistent rain, and consecutive overcast and cold days can limit the number of insects available, even as the temperature climbs.

Mixed precipitation and snow have forced them into their compartments (birdhouses), and often entrances are blocked with snow. Not only have these martins endured a lack of insects, but they have been forced into situations where they cannot escape. Groups of birds have died in compartments after gathering together to keep warm—only to discover a dead martin has blocked their exit from the house.

Following their long migration, the earliest returning birds are in a weakened state. Non-stop foraging for a small insect supply can expend as much energy as is gained. Martins can survive these conditions for a short period but after three to four consecutive days of no food they are weakened to the point of not being able to fly, even if the weather improves.

That has left us asking: what can we do to save the swallows?

We’re trying a new feeding technique here at my colony site. Since discovering it, the 80+ martins are feeding well, and have come for food when they hear a whistling sound and see the feeding plate and flinging spoon (you’ll understand below). Tree swallows often join the purple martins to feed, often copying their behaviour and catching food in the air or picking it off the ground. The aerial acrobatics of both swallows swooping and catching the food in flight is a sight I won’t soon forget!

An adult martin can maintain its weight by eating 40 crickets a day. Eggs will also do, and one scrambled egg will usually feed two adult martins for a day.

For lack of a better word, I describe this process as “flinging” the food into the air. Martins are not immediately attracted to eggs or crickets that are flung, so pick a day when the birds have not eaten and may be tempted by the flying food.

I use a plastic picnic spoon or a wooden stir stick for paint cans. Put the eggs or crickets onto the spoon or stir stick, bend it backwards, and launch the food into the air. It will go quite high. It may take a few tries for the birds to fly after your offerings—this is because they’re differentiating this meal from the insects they normally eat.

All it takes is one bird for the rest to catch on, and they won’t forget once they’ve learned to eat crickets or eggs. Martins will often pick up food on the ground when it has fallen. Once the martins have learned to eat this food, it can be flung into the air with a simple hand toss.

Supplemental feedings such as this have been happening throughout the United States and Canada for many years now. Although the feeding schedule can be adjusted based on the number of martins at a colony site, it doesn’t hurt to put in the effort to help one of Ontario’s declining swallow species get through tough times! 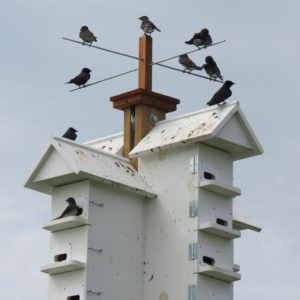 The organic farm participated in Nature Canada’s Save Our Swallows campaign. 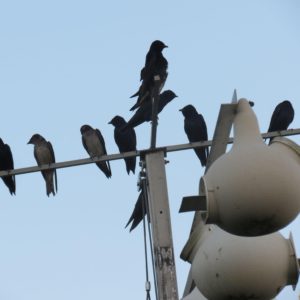 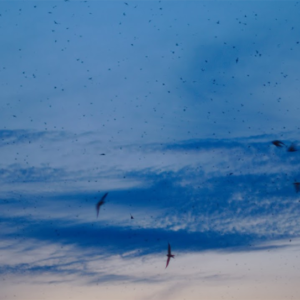 Out in the field: Monitoring swallow roosts along Grand River

Imagine being out on a calm, methodical river, while you are paddling a canoe with the sun slowly...