Make friends with a tree on National Tree Day!

Jaime Clifton-Ross, Guest Blogger[/caption] This blog was written by guest blogger Jaime Clifton-Ross. One of the first things kids learn to draw are trees. Do you remember that classic green shape, resembling a broccoli crown, set atop a thick red-brown trunk? This iconic image was the reason we coloured through our green and brown crayons long before any others. But why do kids love drawing trees? What makes people connect with them at such a young age? Perhaps because they play such a prominent role in our daily lives as Canadians. It’s hard to think of Canada without considering the impact that trees have had on our country, both ecologically and culturally. You can’t walk down the street without encountering some type of tree, whether it’s a Douglas fir, a sitka spruce, or even a Cedar Tree. Much of our natural landscape is covered with dense forests, some even home to old growth trees that have stood for over 1,000 years. We honour our cultural connection to trees through the beloved maple leaf emblem, since one of our most famous commodities drips from the icy trunks of Maple Trees. [caption id="attachment_29290" align="alignright" width="186"]

Lush forest at Juan De Fuca Provincial Park, in Port Renfrew, BC. Photo taken by Jaime Clifton-Ross. August 2016[/caption] To celebrate trees, the House of Commons passed a private members motion on March 2, 2011 declaring the Wednesday of National Forest Week as National Tree Day. At the insistence of Tree Canada, this special day was created to give Canadians the opportunity to learn more about the great benefits of trees while encouraging them to celebrate our country’s forest heritage. Communities across the country are invited to explore nature, enjoy its beauty, and also help nourish it by planting new trees. So in words of famous painter, Bob Ross, I encourage you to “talk to a tree, make friends with it”. Did you know that trees provide many benefits? Here are just a few:

Visit National Tree Day’s official website to find out how you can take part in celebrations taking place across the country! As well, if you are in the Ottawa area, Nature Canada will have a booth at the Healthy Trees—Healthy City Event! Click here for more information.

Do you know your province’s official tree?

Samantha Nurse, Web and Social Media Coordinator[/caption] Today is National Tree Day and to celebrate, we wanted to let you know a little bit more about your provincial or territorial tree! As you know, in Canada there are 10 provinces and 3 territories. Each one of these has an official tree except for Nunavut. Even Canada has an official national tree! Below we have listed information on all the provincial and territorial trees, along with our national tree.

British Columbia’s provincial tree is the western red cedar. This tree is found throughout the province, mostly is the Coast and Columbia Forest Regions. These trees are large and tall, growing up to heights of 45 to 60 meters! The western red cedar is also a favourite for use in building boats and canoes. [caption id="attachment_22504" align="aligncenter" width="300"]

Alberta’s provincial tree is also a conifer and it is a lodgepole pine. This is a native tree to western Alberta, with long needles and a tall build. Depending on where you are, they can grow tall and straight, or as contorted and short. Lodgepole pine was also used for medical purposes in the past, with the pitch being used on open wounds and the buds used to relieve a sore throat. [caption id="attachment_22506" align="aligncenter" width="300"]

The provincial tree of Saskatchewan is the white birch. This tree can be found across Canada and has the nickname ‘paper birch’ due to the colour and texture of the bark. White birch provides essential habitats for a variety of animals including the ruffed grouse and redpoll. [one_half]

Manitoba’s provincial tree is the white spruce and it is also commonly found throughout Canada. This tree is important for soil stability as well as being a source of cover. When Natives and Europeans settled into Canada, the white spruce served as a source for fuel and shelters.[one_half]

For people who live in Ontario, your provincial tree is an eastern white pine. You can spot this tree by its 5 needles and tall form of 22 to 30 meters. This tree is an important part of Ontario habitat, providing a home for animals like the Black-capped Chickadee, Pine Warbler, Red Squirrel and White-tailed Deer.[one_half]

Next for Quebec’s provincial tree, it is the yellow birch. This tree is one of the most valuable native birches found in Canada. These trees can live up to 150 years and they are used in the distillation of wood alcohol, charcoal, oils, and tar.

This eastern province has the balsam fir as their provincial tree. This is also a coniferous tree, having flat, short needles. This is the tree that you would most likely get as a Christmas tree due to its compact shape.[one_half] [caption id="attachment_22496" align="aligncenter" width="299"]

Nova Scotia’s provincial tree is the red spruce. This tree is one of the older trees in Canada, able to live more than 400 years. The wood from the red spruce is actually best used in making stringed musical instruments like guitars and organs.[one_half]

PEI’s provincial tree is the common red oak. This is a popular tree to plant due to its appeal of symmetrical shape and bright red fall leaves. As well, many may recognize this tree from its signature capped acorn

The provincial tree of Newfoundland & Labrador is the black spruce. This is a common species of tree found throughout Canada and one of the principal species of the Boreal Forest. Black spruce is also known as Canada’s paper tree as its fibers add strength to paper products.

As for the territorial trees, Yukon’s official tree is a subalpine fir. This tree is native to the interior mountains of the Yukon and has blue-green needles. This tree can be found contorted and twisted near the edge of the treeline. [caption id="attachment_22507" align="aligncenter" width="300"]

Lastly, the Northwest Territory has the territorial tree of the tamarack. This is one of Canada’s most widespread conifers, ranging across all provinces and up near the Arctic Circle. Although, it is not like regular conifers in the fact that it drops all its needles in the fall.

That is the end of the provincial and territorial trees we have in Canada! Each one of these trees serve as an important part of our lifestyle as well as important to habitats. Nature Canada is dedicated in helping all aspects of nature have the protection they need. For more information on these trees, click here.

Show the love on National Tree Day – Give a leafy friend a hug!

Don't worry if these questions take you by surprise, since 2011 is the debut year for Canada's National Tree Day celebrations, spearheaded by the Tree Canada Foundation, which focus on the "great benefits that trees provide us - clean air, wildlife habitat, reducing energy demand and connecting with nature". Nature Canada's celebrations today include our Hug A Tree Photo Contest, which we're asking all of our supporters to enter for their chance to win!
I started National Tree Day thinking about the innumerable ways that trees (and forests) benefit me and my family each day. For example, we have 16 species* of trees and woody shrubs in our small Ottawa yard, which offer us shade, improve our air quality and attract lots of birds and insects to our backyard. I also have several beautifully handcrafted pieces of wood furniture in my home. Those items represent a market for value-added forest products that can be a big incentive for ecologically and economically sustainable forest management, including things like Forest Stewardship Council (FSC) certification of forests. Plus, markets for non-timber forest products are growing in Canada and elsewhere, which makes me think of how much I love wild blueberries and cranberries! Not to mention Canada's amazing forest protected areas! 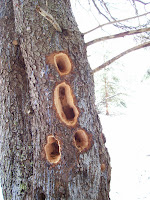 I've also been thinking about how important trees and forests (such as the Boreal forest) are to many of the migrating birds we're watching head south right now, as well as other wildlife that rely on forests seasonally and year-round. Just think of all the bird species that use trees for nesting, from Woodpecker species to Great Blue Herons!
And having spent time as a kid in 'working forests' with my then-silviculturist father, I can't overlook the importance of trees and forests to many communities across this vast country. The Canadian Forest Service reports that the forest industry - in all of its forms - is the "largest non-urban employer in the country".
In closing, there's really not a better time to kick-off Canada's National Tree Day celebrations than the 2011 United Nations International Year of Forests. Here are some quick facts about global forests from the UN's International Year of Forests (IYF) website: 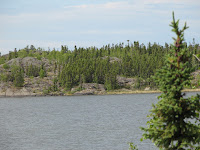 For more on what Nature Canada is doing for the IYF, check out our website and our interactive map of Canada's forests. And don't forget to enter our Hug A Tree Photo Contest for your chance to win!
Have a wonderful National Tree Day, and a thoughtful National Forest Week!
All photos by A. MacDonald * No, not all of these are native species, but I'm working to increase the proportion that are native over time.

This Ain’t No Way to Phase Out Coal

As the weather turns from spring to summer, we are drawn to the natural wonders found at our...

As you know, all too well, human activity has severely altered most landscapes on Earth. Species populations are...

These beautiful songbirds are some of the lucky ones when it comes to escaping the brutal winters of...

Did you know that June is Orca Awareness Month? While the celebration originated in Washington state, in 2016...

NatureKids BC (NKBC) is an award-winning network of 24 nature clubs across British Columbia that help children and...