OTTAWA (June 17, 2014) Nature Canada and BC Nature have expressed their profound disappointment at the federal government’s decision to conditionally approve the Northern Gateway pipeline and tanker proposal.

“It is most disconcerting that the federal government has chosen to gloss over the risk of oil spills and the environmental harm that such spills would cause,” said Stephen Hazell, interim executive director of Nature Canada. “The expert evidence before the Panel was that there is one in four chance that a pipeline has a major spill in its lifespan – those are worse odds than playing Russian roulette.”

The University of Victoria Environmental Law Centre represented BC Nature and Nature Canada, at the hearings. Four separate Enbridge expert witness panels were questioned for a total of over twenty-five hours, at four locations, over a five month period. These cross-examinations addressed a variety of deficiencies with Enbridge’s application including caribou habitat analysis, species recovery following oil spills, chronic oiling and spills probability analysis. BC Nature and Nature Canada also brought several important procedural motions and secured the late admission into evidence of key material on threats to endangered caribou populations. Nature Canada and BC Nature were one of only two environmental coalitions that participated throughout the hearings.

Nature Canada also expressed solidarity with First Nations and remote northern communities who have not been adequately consulted despite having the most to lose personally, economically and ecologically.

Nature Canada is the oldest national nature conservation charity in Canada. Over the past 75 years, we’ve helped protect over 63 million acres of parks and wildlife areas in Canada and the countless species that depend on this habitat. Today, we represent a network of over 45,000 members & supporters and more than 350 nature organizations in every province across Canada.[/one_half_last] 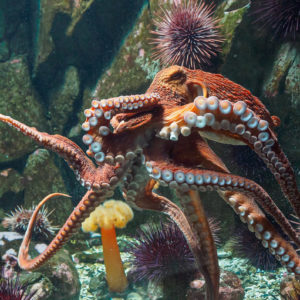 Giant Pacific Octopus: A Large Piece of the Octo-Pi

The Giant Pacific Octopus is very much a unique animal, especially when considered in the context of the...

From the flowing streams to the old growth forests to the peak of the mighty mountains, Canada has...