The Fraser Delta – Importance for shorebirds

The Fraser River delta is an extraordinary place for birds, one of the most important in all of North America. This is especially true for shorebirds and waterfowl. A remarkable 50 species of shorebirds have been observed in the Delta. The most numerous, during its migration, is the Western Sandpiper, of which as many as half a million have been counted in one day!  Shorebirds are a particular concern because, as a group of species, they are declining rapidly – having lost 40% of the populations since 1970 according to the State of Canada’s Birds: 2019. For those species that migrate to Latin America for the winter, that decline has been 52%.

The factors impacting shorebirds and causing their declines are complex – pollution, oil spills, climate change effects on the breeding grounds, and loss of habitat at key stopover sites. An adequate supply and distribution of stopover sites are essential to the survival of most shorebird species. Stopovers function as key sites where birds can gather, rest, and feed to restore their energy supplies, along their migration routes of thousands of kilometres.  Shorebirds depend upon a network of these sites along their migration routes that crisscross the hemisphere.  Think of stopovers as that gas station and restaurant along a long and uninhabited stretch of the TransCanada highway. If you don’t stop there for gas and food, you are in big trouble! Some shorebirds can nearly double their body weights at key stopover sites giving them energy to migrate thousands of kilometres.

Boundary Bay, Roberts Bank and Sturgeon Bank form one of the richest and most important ecosystems for migrant and wintering shorebirds and waterbirds in Canada and is an essential stopover for dozens of species. The area is recognized as a globally significant Important Bird and Biodiversity Area, as well as Western Hemisphere Shorebird Reserve Network (WHSRN) Site of hemispheric proportions. The WHSRN website describes the Delta in the following way:

“Several million shorebirds pass over the estuary each year in migration and tens of thousands remain in the winter. The mudflats on Roberts Bank in the centre of the estuary harbor the greatest number of shorebirds. Over 500,000 Western Sandpipers have been estimated to use the mudflat on a single day in spring migration. The mudflats are many kilometers wide during low tide. The mud teams with tiny invertebrates – in some places over 1000 invertebrates have been tallied in a 10 cm diameter core of mud. And on the surface, tiny diatoms and bacteria coat the mud in a greenish hue (called biofilm) that Western Sandpiper dab from the surface with specialized tongues. In the marshes, Dowitchers probe for marine worms and Yellowlegs dart after small fish. On the sandflats, Black-bellied Plovers and Dunlins pursue marine worms.”

All is not well in the Delta though.  It is under threat from many pressures associated with this rapidly growing urban and agricultural centre.  Expansion of the Roberts Banks shipping terminal, disturbance of shorebirds from dog running and recreation, and oil spills and other pollution are the key threats to these birds.  The proposed port expansion of the shipping terminal poses the biggest threat as it would likely disrupt currents and flow patterns, undermining key food resources, especially the biofilm that powers many of the shorebird species.

To protect and restore the Delta’s shorebird habitat and essential food resources requires a concerted effort at local, municipal, provincial and federal levels. Valid alternatives to Terminal expansion need to be taken seriously.  A comprehensive Fraser River Restoration and Management Plan should have been completed and implemented long ago.  We are behind schedule to save the Delta, but it is not too late.  The time to act is now. 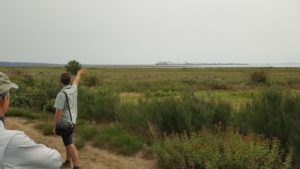