Are the underwater mountains and coral forests off the coast of British Columbia worth protecting?

On June 5, Nature Canada, CPAWS-BC and the David Suzuki Foundation hosted a free public event in Vancouver to kick off a petition campaign calling for marine protection for the Pacific Deepsea Oasis.

Few Canadians are aware of this magnificent biological hot spot – an awe-inspiring landscape of underwater mountains and volcanic vents that breath life into the ocean.

“As the country with the longest coastline, Canada has a major responsibility to protect oceans and all they provide,” said Gauri Sreenivasan, Campaign Director for Nature Canada.

Without permanent protection, the Deepsea Oasis faces threats from commercial fishing and the emerging issue of deep-sea mining. The event on Wednesday and a new petition campaign aims to change that.

“What’s happening here is very important to us,” said Sayers. “The Pacific is the foundation of our Nuu-chah-nulth culture, our society, and our economy. Our connection to the Pacific is profound.”

Several First Nations whose traditional territory includes the area are in discussion with Fisheries and Oceans Canada about how to best manage the area.

“We want to have a say, and that’s all part of this joint management that we’re working towards. We think it’s important to have our voices in there, to protect what is important to us,” she said.

Scientist and ocean explorer Du Preez explained in her talk that most of the ocean is a muddy, dark desert, where animals sometimes have to wait months for scarce meals to come from the surface.

“What’s better than living in a barren, muddy desert? How about super-heated hydrothermal vents or massive seamounts? This is our Deepsea Oasis,” she said. “These vent fields are like no other place on our planet.”

The Deepsea Oasis, just four times the size of Vancouver Island, contains 46 seamounts and all of Canada’s hydrothermal vents. Du Preez explained that this unique landscape has a major effect on ocean life.

“These environments don’t just make for beautiful deep sea floors – they influence the waters above them and around them for kilometres. We see increased pelagic animals like tunas, jellies, sharks, whales and dolphins surrounding these features,” she said.

Canada has pledged to protect 10 per cent of marine areas by 2020, but we’re only currently at 8.27 per cent. Now is the time to ask the government for protection of the Deepsea to hit that target, but we’ll need public support.

You can help! Join the campaign and speak up for nature by signing our petition.

The Deepsea Oasis is seascape of submerged mountains and fragile coral forests lying under tens of thousands of square kilometres of open ocean. This unique area is a candidate for protection and needs your help! 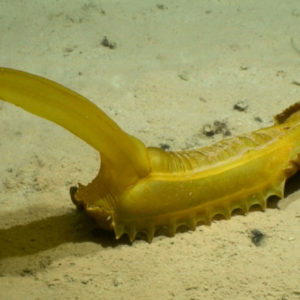 Lots of strange and wonderful animals inhabit the deep sea off the coast of British Columbia. Few are...

This blog was written by guest blogger Amanda Simard.  Jessica Bradford is the 2017 recipient of Nature Canada’s...

A Serious Plan to Prevent and Clean up Marine Oil Spills