Disappearing Act: Grassland Birds Are Running Out of Time.

Canada has lost 300 million grassland birds since 1970-is it too late to turn back the clock?
By Myra Carney Intern and Guest Blogger
Share

From British Columbia to Ontario, Canada boasts a large expanse of grasslands that are home to a huge variety of wildlife. Agriculture is common in these regions, and its intensification is a growing practice due to commodity pricing and the effects of globalization. The conversion of hay fields and pastures into row crops is contributing to the grassland bird declines, with vital grassland habitats disappearing every year. While most of these habitats are concentrated in the three prairie provinces, critical habitats also exist in Ontario and in BC’s Okanagan Valley. Modernization and change can be positive words, but they will be a death sentence for Canadian grassland birds if we are not careful. 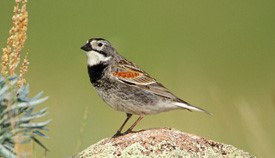 McCown’s Longspur populations have dropped by 90 percent since 1970; the species is now listed as threatened. (Photo: Alan MacKeigan)

More than 70 percent of native Canadian prairies have been lost through conversion to intensive agriculture and other modern developments. The North American Bird Conservation Initiative (NABCI) in Canada (that Nature Canada is a part of) recently released the second State of Canada’s Birds report. This report outlines how major groups of Canadian birds’ populations have changed since 1970.

We now know that since 1970, Canada has lost two out of every three grassland birds. While many of these bird species are close to the brink of extinction, it isn’t too late for us to help them recover-but we must act quickly. Nature Canada has been working with our regional partners for years to expand the amount of protected grassland habitats so that they are safe from conversion to row crops. We recently launched a petition to advocate for the preservation of our great grasslands, and with your help, we can get our government to save our nation’s wildlife.

Climate change is increasing the frequency and severity of drought and flooding periods, as well as increasing the risk of wildfires with severities similar to Fort McMurray in 2016.

Grassland birds like the McCown’s and Chestnut-Collared Longspurs are in desperate need of more habitat space to feed, nurture and grow their population. By pushing for the expansion of protected grasslands, incentivizing sustainable agricultural practices and addressing the causes of climate change, we can save our birds.

When we take action together, conservation works.

How You Can Help:

Sign the Petition: Nature Canada is working to create more protected areas in Canada to save our birds, aquatic animals and other endangered wildlife. Sign our petition to create real change and have your voice heard by our government when it matters most.

Speak Out: Use your voice to demand action from our government against climate change, assist in fighting against broad-scale pesticide use and support organizations that advocate for nature. You can start by sharing our petition on social media!

Reduce Your Carbon Footprint: Choose to bike, walk or jog as much as you can. If you have to go somewhere farther, take public transportation or carpool to reduce fuel consumption.

Get Involved Protect the Prairie Grasslands!

Big new! The federal government recently acquired key grassland pastures in Govenlock, Nashlyn and Battle Creek in Southwest Saskatchewan, and now has the power to protect them—once and for all.