Nature Canada Pipes Up Against Enbridge

The proposed Enbridge Northern Gateway Pipeline would carry oil from the tar sands to a port at Kitimat, B.C. Supertankers fed by the Enbridge pipeline would travel the same waters where the Queen of the North ferry sank in 2006. 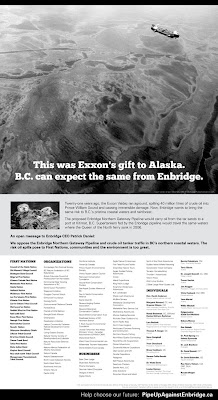 Nature Canada is one of over a hundred signatories – including First Nations, businesses and prominent Canadians – to an open letter opposing the Enbridge Northern Gateway Pipeline and crude oil tanker traffic in BC’s northern coastal waters. The risk oil spills pose to First Nations, communities and the environment is too great.

Add your voice and pipe up against Enbridge by sending a letter to Enbridge CEO Patrick Daniel today.

Since 2017, young people across Canada have been demonstrating their leadership for nature through creative, nature-based projects submitted...

What It Means—and Takes—to Defend Nature

And why we can’t do it alone.

Ending the Year With Hope on the Horizon

This past year has been  an unusual one, but with it came hope — something to embrace and...