Minister Catherine McKenna, a founding member of Women for Nature, opened the evening by talking about how she was inspired to see so many women in the room working together for nature-based solutions to fight climate change. 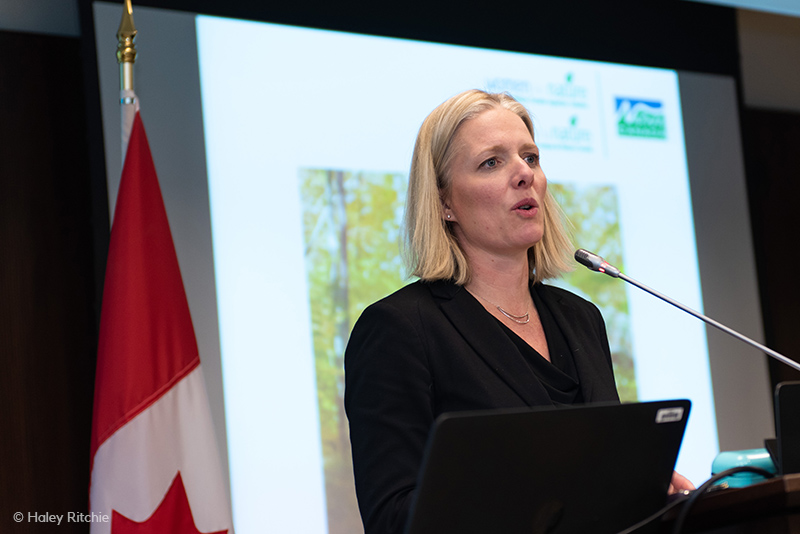 The Honourary Chair of Women for Nature, Senator Diane Griffin, reflected on her many decades of work in conservation along with environmentalists like MP Elizabeth May and MP Linda Duncan.

“Canada is such a large and diverse country but the conservation community is very a small world,” she said. She said the collaborative approach that the Women for Nature network brings can be a strong collective voice for nature.

Member of Parliament Mr. Richard Cannings spoke about his personal connection to nature and how he has always felt humbled by the inspiring women he worked alongside during his professional career, several of which are part of Women for Nature.

Women for Nature co-chairs Ann Dale and Janet Bax thanked all the founding members of the initiative for championing Nature Canada’s work to connect more Canadians to nature.

Prof. Dale announced the launch of the Biodiversity Action Agenda, which encourages new strategies for teaching Canadians about nature. The report includes ideas such as designing cities with natural connections and using new technology and the arts to talk about protecting our land, water and wildlife. It also includes bold asks for policy makers, like the creation of new protected areas, more partnerships with Indigenous peoples and enforcement of species at risk legislation. Copies of the report were available on Monday evening and can be downloaded online.

“There is no second chance from extinction. Can you imagine Canada without polar bears or loons? This action agenda is our chance to make a difference,” said Dale.

Nature Canada believes that a key approach to protecting biodiversity is engaging today’s youth to take action to protect nature’s future. Janet Bax announced that the Young Women for Nature mentorships program has doubled in size this year and we’ll soon announce the young nature leader grants too.

We encourage other professional women to get involved with Women for Nature to champion biodiversity conservation, help connect youth to nature and mentor future leaders for nature. Contact us (jjoy@naturecanada.ca) to learn more.