A call for a Canada – U.S. agenda to support people and the planet

The doors have swung open to an alliance for nature.

Canada and the United States share a vast natural heritage of earth and forests, rivers and lakes, wetlands, grasslands, and coastal areas across the world’s longest international border. We share airways and trails, and a maze of corridors for spectacular annual migrations of whales, birds, caribou, and other wildlife.

As both countries promise to conserve 30 percent of land, freshwater, and ocean by 2030 by advancing Indigenous led conservation and supporting nature-based climate solutions, there exists a historic opportunity to work together to address the twin existential environmental crises of our time: species collapse and climate change.

Wildlife species don’t know borders. They don’t carry passports. Only 2,000 Monarch butterflies were counted this Winter in an area of California where millions used to migrate from Canada.There are precipitous declines in right whales, caribou, songbirds and many other species that cross our borders. Ecosystems such as forests and grasslands that safeguard our climate face increased threat from industrial expansion.

When biodiversity collapses, the web of animals and plants that support one another and our climate is torn apart until almost nothing can survive.

Canada and the United States share a responsibility to act.

Prime Minister Justin Trudeau has made the most important conservation commitment in Canadian history. He now has an ally in U.S. President Joe Biden, who has made significant commitments to goals shared by Canada for conservation, climate action, and species protection.

The doors are open to an alliance for nature.

Both governments have made the “30×30” pledge to conserve 30 per cent of land, freshwater and ocean by the year 2030. They both support Indigenous-led conservation. Nature-based climate solutions are on the agenda in each country.

Acting jointly on these commitments on both sides of the 9,000 km border would generate post-pandemic hope now and ensure a legacy for nature and for future generations.

There is a historic opportunity to work together to address the twin existential environmental crises of our time: species collapse and climate change.

Teaming up could also create a powerful influence on the international stage as the nature crisis joins climate at the top of the global environmental agenda.

Coordinated efforts to protect nature across Turtle Island, as some Indigenous peoples refer to North America, would help the whole planet.

A Canada-U.S. alliance could have a breakthrough impact for nature and the climate if bold joint action is pursued in three priority areas: Expand protections for ecological corridors and the species that rely on that habitat, support Indigenous rights and conservation, and advance nature-based climate solutions.

Nature Canada urges Canada and the United States to build towards a joint declaration on an alliance to maximize nature’s capacity to harbor biodiversity and safeguard our climate, and to establish the formal cooperation mechanisms that will move this agenda forward.

Click on each item to navigate to its corresponding section.

Some of the world’s most precious ecological corridors span the U.S. – Canada border, from mountain ranges in the West, to the Great Plains grasslands in the prairies, to seascapes off the three coasts and the boreal forest spanning Alaska to Newfoundland.

A Trudeau-Biden joint action plan to protect and reconnect fragmented corridors would support the safe movement of wildlife species for food, shelter, reproduction, and adaptation to a changing climate.

Nature can also be better protected by improving and coordinating stronger action through key policy and legal instruments. For example, rollbacks on migratory bird protections announced in the waning days of the Trump administration risk further declines in bird populations, which are already in free fall across North America, with three billion birds lost since 1970– an overall decline of 29 percent in this period.

The landscape between Algonquin Provincial Park in Ontario and Adirondacks Park in New York State is important to many species at risk. There are protected areas between the two, but they are fragmented and need to be connected. Similarly, connecting and conserving areas within the forested, mountainous Northern Appalachian – Acadian region, stretching from New York to Nova Scotia, would support a rich web of wetlands, rivers, lakes, streams and bogs and the species that live in them.

This project seeks to protect the mountain range habitat that is home to such iconic species as grizzly bears and golden eagles, from the Yellowstone National Park in the state of Wyoming up to the Yukon Territory in Canada.

Spanning southern Canada to Mexico, it’s a globally significant swath of one of the most endangered landscapes on Earth, with significant potential for carbon storage and habitat for many species including the Central Flyway for migratory birds.

These coastlines provide significant opportunity to collaborate for protection of ocean corridors from sea floor to surface and revival of at-risk species. Resident orca whales live in waters from Alaska to central California. Endangered North Atlantic right whales swim more than 1,500 kilometres from feeding grounds in Canada to calve in warm waters in the southern United States.

Canada and the United States share the Great Lakes St. Lawrence ecosystem, home to 200 species at risk. The Columbia River, largest in the Pacific Northwest, flows into the Pacific Ocean. The Red River flows North from Minnesota to Lake Winnipeg. The Lake of the Woods and Rainy River Watershed spans the Ontario, Manitoba and Minnesota borders.

Across the globe, the areas of highest value for biodiversity and climate regulation are  on lands managed or co-managed by Indigenous communities. Learning from and collaborating with Indigenous governments and communities is therefore essential to Canada-U.S. cooperation in conserving large transboundary landscape corridors. 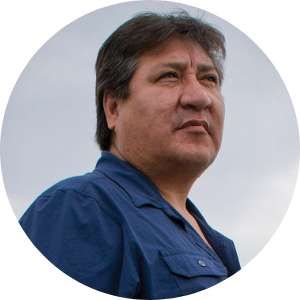 The Canadian government supports the creation of Indigenous Protected and Conserved Areas and Guardian programs. These programs, also recently started in Alaska, support Indigenous people to care for their lands and community using traditional knowledge and science.

“The guardian programs literally transform people’s lives and communities,” says forester Valerie Courtois, Director of the Indigenous Leadership Initiative. “… By honoring the cultural responsibility to the land, Indigenous Peoples are strengthening our communities and expressing our nationhood.”

President Biden has committed to working with Tribal governments for conservation goals and appointed Rep. Deb Haaland, the first Native American cabinet secretary, to the Department of the Interior, the key office for establishing protected areas.

“A voice like mine has never been a Cabinet secretary or at the head of the Department of Interior,” she said in a message pinned to the top of her Twitter feed. “Growing up in my mother’s Pueblo household made me fierce. I’ll be fierce for all of us, our planet, and all of our protected land. I am honored and ready to serve.”

We need to work together to connect the dots between the stress climate change is placing on species and ecosystems, and nature’s capacity–from forests to farms–to store carbon.

The Canadian government has made protecting and restoring nature a pillar of its climate policy, starting with investing $3.9 billion over ten years to unlock the power of nature to reduce emissions, notably by planting two billion trees over a decade.  This is just the beginning of what’s needed.

Canada and Mexico have already worked closely for two years co-leading the “nature-based solution action track” for the Global Commission on Adaptation initiative created to bring attention to nature’s role in climate adaptation.

Canada and the United States must reform the way they monitor, calculate, and report emissions from industrial logging to better represent the industry’s impact and to place the industry under a carbon pricing regime to encourage climate-friendlier logging practices. This has particular application in the Canadian Boreal forest, which contains over 300 billion tons of carbon– as much carbon as the world emits over 36 years.

President Biden’s commitments to nature protection, nature-based climate solutions and work with Tribal governments to protect land and water open a significant opportunity to breathe new life into shared goals with Canada on conservation, climate change, and species protection in North America and on the international stage. These issues should feature prominently at the virtual international Leaders’ Climate Summit that President Biden is hosting on Earth Day, April 22, 2021.