How much do you know about the Common Loon? 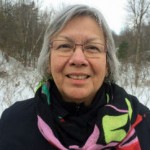 Did you know that you may not recognize the common Loon in winter compared to summer?

During the winter, common Loons can be distinguished from other Loons by the indentation of the white neck color at mid-neck. Common Loons are also larger than most Loon species, excluding Yellow-billed Loons. 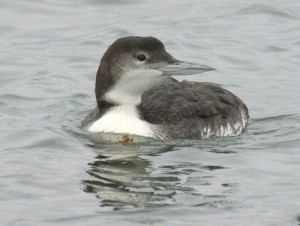 Photo of a nonbreeding adult loon by Cameron Rognan

How do you distinguish the male Common Loon from the female?

Male and female Common Loons look alike. You can only distinguish them when they are close together because the male is larger than the female.

Young Common Loons look similar to winter adults, but have more white on their head and back. This juvenile plumage is maintained through their first summer.

Where can you find the Common Loon?

Found in every province and territory in the country, the Common Loon is truly a Canadian animal. It spends the winter months along the Pacific and Atlantic coasts of North America, from Alaska and Newfoundland in the north to Mexico in the south, as well as in Europe and Iceland.

During the spring and summer months, the Loon prefers to nest on lakes with clear water, making it easier to find prey. It is especially drawn to lakes with rocky shorelines and deep bays and inlets. The lakes have to be long enough to allow for the running takeoff required by these heavy birds.

A migratory bird, the Common Loon travels its fall route between September and December and returns in spring between March and June.

What do Common Loons eat?

Common Loons feed on fish, frogs, crayfish, mussels, leeches and aquatic insects. Small prey is swallowed underwater but larger ones are brought to the surface and eaten there. 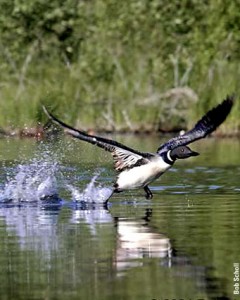 By the end of summer, the fledglings are capable of feeding themselves. They may stay longer than the parents on the home lake before they migrate to store enough energy for their first migration to the coastal waters where they will stay for at least the next two years before they return to their home territory.

During the winter months, the loons are on the coastal waters where their diet is mostly flounder, crabs, lobster, shrimp, gulf menhaden, bay anchovies, and silversides.

Is that body shape an advantage?

Loons are heavy birds because unlike other marine birds their bones are solid. Their mass and the legs with the large webbed feet located well back on their sleek bodies are advantages in swimming and diving for prey. They have been known to dive to depths of 70 m and stay submerged for more than three minutes, but the average dive is less than five m deep and 40-45 seconds in duration.

However their mass and position of the legs make walking on land and standing difficult. So the only time they come ashore is to nest and that as close to water as the security of the eggs allow. In addition, their large size and weight means that they require at least 400 m to run across the lake surface to takeoff. However, once airborne, loons are powerful fliers and have been clocked flying at speeds close to 130 kph.

How long do Loons live?

The Common Loon may live twenty years or more.

Why do chicks ride on their parents backs?

With their young on their backs, the adult loon can provide better protection from predators both above and beneath the water’s surface. It is also an 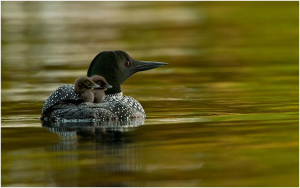 opportunity for the young to conserve energy and body heat.

During the first week after hatching a chick may spend more than half its time on adults. After a week there is a sharp drop in back-riding.

Why are the Common Loon’s eyes red?

The red is caused by a pigment in the retina that filters light when loons dive beneath the water’s surface and allows for sight.

How many types of loon species are there?

With the exception of the Arctic Loon, all these loons breed in Canada.

How can you protect the Common Loon?

Human development and recreational use of lakes, acid precipitation and other pollutants are the biggest threats to the Common Loon.

Do your part to prevent acid rain. Sulphur dioxide (SO2) and mono-nitrogen oxides (NOx) emissions from industrial processes and the combustion of fossil fuels are the principal sources of acid rain. Lakes that have been acidified cannot support the same variety of life as healthy lakes. As a lake becomes more acidic, crayfish and clam populations are the first to disappear, then various types of fish. Many types of plankton-minute organisms that form the basis of the lake’s food chain-are also affected. As fish stocks dwindle, so do populations of loons and other water birds that feed on them.
• Stay informed and make others aware about acid rain.
• Support research and uses of alternative energy sources such as waterpower, wind and solar power.

Participate in projects to survey the Common Loon populations, work as a steward to share knowledge of better boating, fishing and shoreline practices, or restore damaged shoreline environment. For more information, read our living by water tips.

For more information on the common loon, check out the video below or follow this link to another short video.

Restore the Call from Biodiversity Research Institute on Vimeo.

The Snowy Owl to Represent Canada

Last night at the Canadian Museum of Nature, the Royal Canadian Geographic Society, in partnership with Bird Studies Canada,...

The Common Loon: What Are They Saying?

Nothing is quite so symbolic of summertime in the Canadian wild as the calls of the Common Loon....

Known in French as Plongeon huard, the Common Loon is an icon of the Canadian wilderness, it’s likeness...