Since its founding in 1987, the Nature Trust of New Brunswick has historically been run through grassroots efforts, with volunteers incorporating the organization to conserve and steward critical natural areas of New Brunswick and to educate New Brunswickers about the importance of these spaces.

Prior to 1992, all Nature Trust work, including volunteer coordination, preserve acquisition and communication, was done in private homes and offices until a dedicated office space was found, which brought about growth in both volunteer and staff capacity.

As time went on methods of volunteer organization and data management had shifted which left the organization falling behind. When Renata Woodward became Executive Director of the Nature Trust in 2009, database software called GiftWorks was in place and multiple spread sheets were used to follow up with supporters and volunteers. At the time, only certain staff managed the data and there was with no system for sharing information between staff.

Over the years, Renata recognized that the organization needed a new, modern management system that not only would keep track of volunteers, supporters and donors, but that would also address their individual efforts and needs within the organization. In 2014, the Nature Trust team was invited to join other environmental non-profits in Toronto at an engagement organizing gathering run by the Gosling Foundation. They immediately accepted.

“When I attended this gathering, I realized that it wasn’t just about introducing a management database to the organization, but it was about transitioning to a whole new way of involving people on their own time and at their own level and about opening the door to new demographics that we hadn’t been engaging before.” Says Renata.

Engagement organizing is an approach that marries organizing, technology and a culture of developing leadership in others. This includes a shift to a model that focusses on relationship building and mobilization of supporters at the heart of the work to create a resilient, effective organization.

The Nature Trust, keen to begin restructuring, began using a customer relationship management software called Salesforce, which would act as a well-rounded database for all staff and board members. Having seen the positive impact engagement organization can have on an environmental non-profit, the organization made the decision to create an Engagement Organizer position to manage the database, engage with volunteers, and to train staff. This was a bright new beginning for the Nature Trust which has changed the organizational culture

For years, the organization’s successes were driven by individuals, with one staff member taking the lead and the credit in projects. The shift to engagement organization took the ‘me’ out of tasks and focused on a ‘we’ approach, which was sometimes hard to do.

“Everyone felt like they were losing control,” says Renata. “Our staff were used to being able to say, ‘I accomplished that,’ and with this shift, celebrations instead turned to ‘we accomplished this by working together’.”

The Nature Trust staff have used this restructuring to further develop relationships with volunteers and give them shared goals and responsibility within the organization. This ‘distributed leadership’ model has helped greatly with the Nature Trust’s “Friends of…” stewardship groups, located throughout the province. These community volunteer groups are trained and given clear job descriptions on how to manage a specific nature preserve. They are responsible for the stewardship of their nature preserve, including cleaning, trail maintenance and monitoring among other things. The group leader reports back to the Nature Trust on a frequent basis with any information or needs for the property.

“Distributed leadership continues to grow and flourish within our organization. Some groups take leadership in fundraising for their preserve by themselves, and others take leadership in training. Recently, we had a team leader who had to leave, and she found and trained her own replacement, which shows how fully functioning they can be,” say Renata.

The Nature Trust has also created a ladder of engagement through this new model, where donors and supporters are engaged based on their relative level of involvement. The ultimate goal is to help them up the ladder to reach their goal within the Nature Trust.

The organization is also focused on engaging with individuals who do not have an environmental background and who have different interests and skill sets.

A recent example of this comes from their Conservation on Canvas project. In 2013, the Nature Trust was approached by an artist who wanted to paint portraits of 33 of their preserves to raise awareness about the natural biodiversity in New Brunswick. In working with the organization and learning more about their work, he “climbed the ladder” of engagement from an observer to an ambassador who now speaks at events on behalf of the organization. This in turn, has helped the organization reach new supporters and spark interest in people who may not be aware of the trust’s work.

“Don’t get stuck on one group of people,” says Renata. “Go talk to artists, students, IT people, corporations. Talk to office workers who want to get outside. Don’t just engage with the same people over and over.”

Through trial and error over the past two years, the Nature Trust of New Brunswick has become one of Canada’s leaders in engagement organizing and is now called on by other groups and government agencies to explain how it operates.

Renata acknowledges that the Nature Trust board and staff are in a constant state of learning with this organizational shift. “We struggle and experience failure every day, from data entry to sending the wrong message, to not engaging people enough or engaging too much,” she said. “But we don’t just fail – we learn from these mistakes and use them to help improve our systems and communication.”

Next steps in engagement organizing for the Nature Trust include working to help increase land conservation in New Brunswick through their first advocacy campaign, Conserve our NB. The Nature Trust is also working on the creation of a new department, through merging the Communications and Engagement Organizing departments. 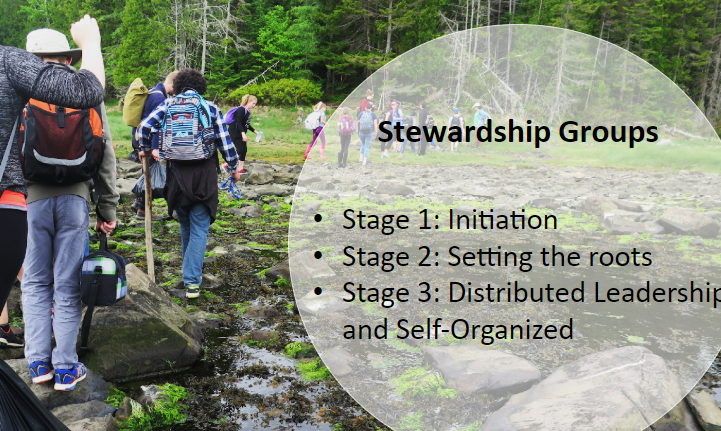 The Nature Trust of New Brunswick has a three-step process for setting up local stewardship groups.