Polar Bear Numbers Could Decline by 30% in One Year: Study 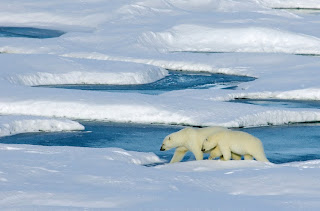 A new study from Dr. Andrew Derocher, one of the world’s leading polar bear authorities, predicts that polar bear populations may crash in one year by 30%. Derocher warns that the bears will starve as the number of days adults are forced to fast increases while they wait for Arctic sea ice to return.
From the Toronto Star:

Scientists factored in the shrinking sea ice, which affects how many seals the bears can eat before they hibernate and how easily they can find mates. Without enough food or opportunity, mating is less successful, fewer, less robust cubs are born, and teenage bears spend longer “wandering around trying to find something to eat.”

All of that information can be subjected to “some fairly advanced math” to create data tables that chart the estimated time of death by starvation for adult male polar bears.

Typically 120 days in the 1980s, the time polar bears have to spend fasting has increased by about seven days per decade and is continuing to increase.

While 3 to 6 per cent of polar bears in the Western Hudson Bay die during a 120-day summer fast, 28 to 48 per cent would die if it reached 180 days, the study found. The fast occurs because polar bears depend on frozen sea surface to cover distances.

Arctic sea ice is shrinking by up to five per cent every ten years – sea ice that not only provides hunting ground for polar bears, but shelter and transportation for seals, walrus, arctic foxes, and the Inuit people. The underside provides a surface for algae that supports cod, char, beluga, and narwhal. The white sea ice also has a cooling effect on climate by reflecting light away from Earth’s surface. As it melts, global warming advances even more quickly.
The United States designated the polar bear as threatened in May 2008. Canada’s scientific Committee on the Status of Endangered Wildlife in Canada places them in a less serious category, as a species of special concern, and they are not included on Canada’s official Species at Risk list. Regardless of its current official status, the polar bear’s habitat is under assault from the effects of our climate crisis, which, if not reversed, will mean the end of this iconic species within our lifetime.
The International Union for the Conservation of Nature added the polar bear to its “Red List” of the world’s most imperiled wildlife in 2006. In 2009, the IUCN Polar Bear Specialist Group (PBSG) cited climate change as the greatest challenge to the conservation of polar bears, and concluded that 1 of 19 subpopulations is currently increasing, 3 are stable and 8 are declining. For the remaining 7 subpopulations available data were insufficient to provide an assessment of current trend.
You can send a letter to Environment Minister Jim Prentice asking him to add the polar bear to Canada’s official species at risk list. Here is a sample letter that you can send.
Back to Stories

An unexpected bird near Wemindji

Since 2012, Nature Canada has worked in close collaboration with the Cree Nation Government (CNG), the Cree Trappers...

Eight decades of advocacy and education, of protecting parks and species at risk. For over 80 years, members...